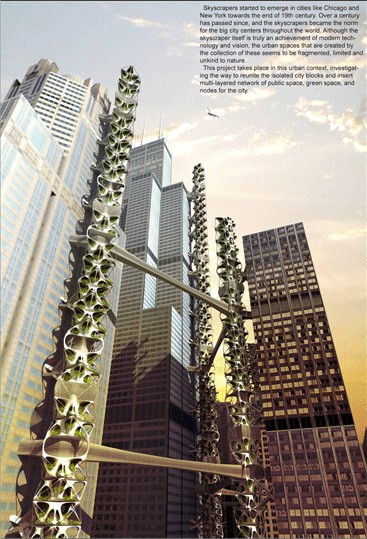 This particular proposal calls for a few basic modules with particular functions that could be combined in various ways to create networks of green functionality outside of and between various skyscrapers. Structural rigidity would rely to some extent on the structures they would be attached to as well as their complex geometries and interconnections.

The beauty of modularity is that plug-and-play systems like these are highly adaptable for future use and modules could, theoretically, be added and removed as-need during the lifetime of the structures. Taken as a whole a series of such modules would be able to provide both the indirect benefits mentioned above as well as direct benefits to adjacent skyscrapers including potential wind and sun regulation to reduce energy needs.

Skyscrapers started to emerge in cities like Chicago and New York towards the end of 19th Century. Over a century has passed, and the skyscrapers become the norm for the big city centers throughout the world. Although the skyscraper itself is truly an achievement of modern technology and vision, the urban space that is created by the collection of these seems to be fragmented, limited, and very unkind to nature. The project takes place in this urban context, investigating the way to reunite the isolated city blocks and insert a multi-layered network of public space, green space, and nodes for the city.

The main structure of this facility consists of two components. The first is the core, which acts as a spine for the units to be plugged into, and the second is the interlocking structure which distributes the overall load of the tower to the surface, slab, and the main structure of the existing skyscraper. This unit is designed to incorporate four wind turbines which convert the kinetic energy of the wind that flows through the skyscrapers into electrical energy. Vertical-axis wind turbine among the various types of wind turbine is chosen due to its flexibility in locating the generator and the efficiency in utilizing the wind energy from both windward and leeward sides. The vertical garden unit is an open structure which provides a habitat for plants, insects, and animals, which also becomes a public park for cities where natural spaces are limited. This unit is combined and multiplied throughout the towers in order to achieve positive effects, such as reducing the urban heat and filter pollutants from the air.

The sky dock unit is the node where the network between the towers and the existing skyscrapers takes place. The bridge connects the nodes to create a city where activity, movement, and events occur in multiple layers rather than just on the ground level and inside the skyscrapers. The program unit is an enclosed space which accommodates multiple functions such as café, meeting room, observatory, museum, information center, retail, game room, restrooms, media library, etc. The program will be determined according to the location and the users of the units 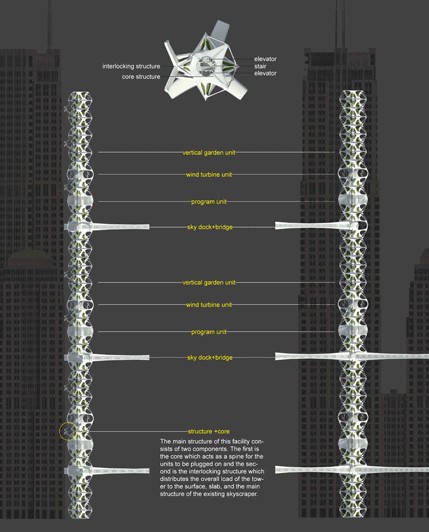